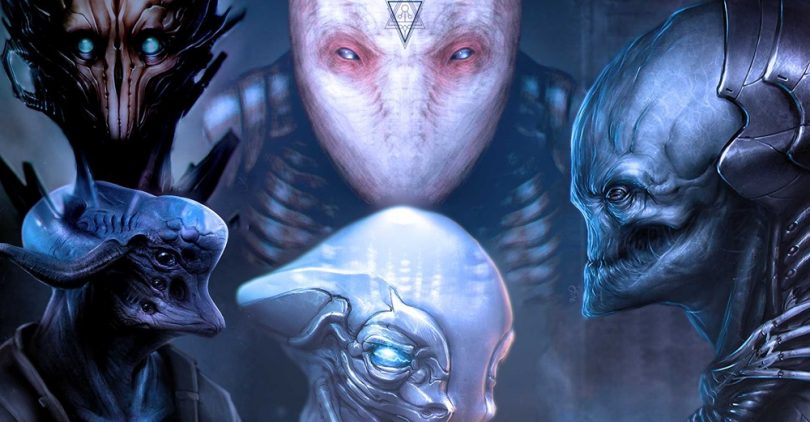 Theories about aliens are overcome every day desperate to answer questions that science has not been able to solve: Where do we come from? Where are we going? are we alone in the universe?

These theories only base their conjectures on accounts of people who claim to have been in contact with non-terrestrial beings.

Also in some ancient legends of different ancient civilizations, they refer to three races in particular: Reptilians, Grays and Pleiadians.

One of the most famous races of extraterrestrials that is related to world domination is that of the reptilians or reptoids, originating from the draconians.

Physically they have a body similar to that of a tall human with reptilian characteristics such as elongated yellow eyes or green scales.

Some hypotheses indicate that the reptilians originated from an intelligent race from outside or inside the Earth but that they evolved together with humans on the planet.

It is said that it is a very competitive warrior race based on a hierarchical political-military system, they have psychic powers and feed on negative energies such as hatred and fear, which is why the first civilizations could mistake them for demons.

Currently they live disguised as human beings and coexist with the world political elite, this is how they exercise their control and divert certain decisions in favor of their race.

They supposedly come from Orion and are responsible for most of the abductions, this because they supposedly have permission from the US government in exchange for technological knowledge that the aliens gave to the military.

The Grays work hand in hand with the Reptilians, as they have a powerful persuasion ability.

The grays are extremely similar to each other since it is possible that they are actually clones and lack feelings, which justifies their automaton behavior and their null response to the pleas of their abducted victims.

Taurus Pleiades is a stellar group to which our Sun also belongs.

Its inhabitants are very similar to humans, but this civilization has a higher degree of evolution, which allows them to live together in total peace, harmony and love, in addition to mastering techniques such as time travel.

They are much taller than most Earthlings as well as being blond, with blue eyes, and fair skin. Just as ancient civilizations could have mistaken the Reptilians for demons, it is believed that the Pleiadians could have been mistaken for angels.

The Pleiadians seek to counter the dark forces of the Reptilians and help the Earthlings evolve.

These are not the only races that are talked about, however, they are the most representative.

Apparently, there has been an intergalactic war in the course of world history, will it be part of the alien strategy? Or is it just another attempt to justify our existence as a species?