Warning: The magic method Tribe__Extension_Loader::__wakeup() must have public visibility in /homepages/20/d746359503/htdocs/clickandbuilds/MysteriousThings/wp-content/plugins/the-events-calendar/common/src/Tribe/Extension_Loader.php on line 157
 A strange ‘angelic being’ touched his shoulder and saved his life (Video) – Mysterious Thing 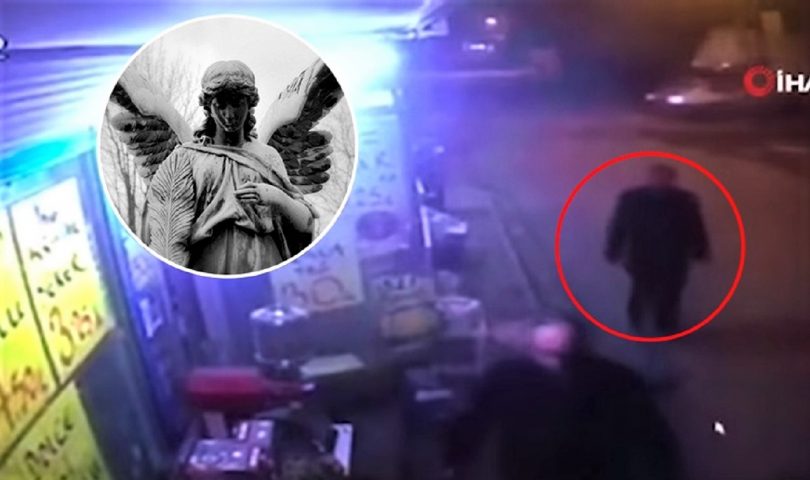 That night, his normal routine of picking up the products he had abroad was very different due to a series of really strange events.

In a video from a security camera, you can see an unidentified man walking down the street towards Binici’yi while standing in front of his store. When the stranger arrives at the store, he approaches timidly and indifferently, taps him on the shoulder and keeps walking.

Wondering who just touched him, Binici’yi turns around, but only sees a white van passing down the street. Suddenly, from the rear of the vehicle, a large metal grid is fired at the owner of the store, who crouches at the last moment, thus avoiding a truly tragic end.

After recovering from the fright, Binici’yi looks around the street, apparently trying to find out who had warned him of the imminent danger, however, there was no one.

It was when he decided to check the images of the security camera to know what had happened the previous night, and then Binici’yi understood that a really miraculous meeting had taken place.

Binici’yi explained that the driver of the van returned to the store to apologize for the incident, but the strange man who touched his shoulder simply disappeared without leaving a trace.

While it is likely that the strange event was only a simple coincidence, there are many who say that Binici’yi was saved by an angelic being.

They point out the casual nature in which the man approached the owner of the store and how it was impossible for the stranger to know that the grid was going to be released from the van just seconds later, but somehow he knew that the moment was going to happen.

This is why it is believed that the mysterious man was really a guardian angel, a spiritual being who is “assigned” to help in various ways the people here on Earth.

These spiritual beings are always with us to protect us, especially appearing in our lives in times of impending problems or dangers, as has happened in Turkey.

This incident would show that it is a fact that we all have guardian angels, but most of the time we do not pay attention. This shows us that we should be attentive and willing to receive help for our daily lives, as it could save our lives.

What’s your opinion about it? Was it a divine intervention or simply a disturbing coincidence? Watch the video below, and leave us your comment below.