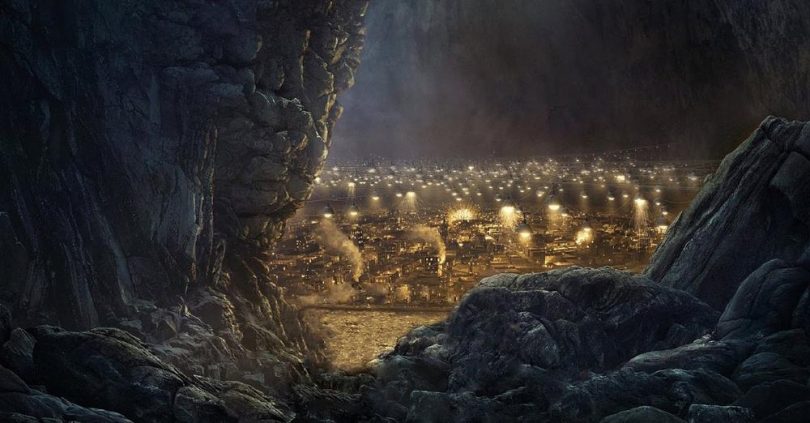 When Warren Shufelt was inspecting near downtown Los Angeles for oil, gold and other minerals with a device of his invention, he accidentally stumbled upon a so-called “underground reptilian city.”

What is true in the news about an underground reptilian city in Los Angeles? Well, in 1933, the engineer Warren Shufelt used a device invented by himself to take soil readings. Their target was oil, gold, or any kind of valuable material.

However, from one moment to the next, the instrument began to show a series of “voids” under the ground . He quickly realized that it was a network of underground tunnels, so he wasted no time and drew a map of his find.

Everything seemed to indicate that it had been built with a work plan . With rooms at every certain distance and warehouses that led to other tunnels .

An underground city in Los Angeles?

Shufelt deduced that some of the tunnels were up to 30 kilometers underground . At first he thought they were ventilation pipes.

However, he never thought that these tunnels connected to a much larger city , which was submerged under the Pacific Ocean thousands of years ago, during a terrible earthquake and subsequent floods.

According to later investigations, the complex discovered by Shufelt was used as emergencies, with a capacity to house up to 5000 individuals .

The so-called “reptilian city stored supplies of non-perishable plants used for food and in sufficient quantities to feed the survivors. Or at least until it was time to return to the surface. “

“It also had a supposed complex where documents, artifacts and ancient treasures would be kept .”

The engineer investigated the tunnel network on his own , which led him to meet a member of the Hopi , known as Chief Little Green Leaf.

The Legend of the Lizard People

He commented on the existence of an ancient race of “Lizard People.” The story went that about 5000 years ago, a meteor shower fell on the west coast. A proof of this is the Winslow crater , north of Arizona.

Thousands of people died that day. Miles of fertile land and forests were lost. An unprecedented catastrophe.

The few survivors gathered on the west coast to come up with a plan and build safe areas. However, the sky sentinels appeared and indicated that it was time to return to the underground shelters.

Thus, the Lizard People closed the access tunnels, saving themselves from another meteor shower that swept the west coast this time.

But despite having survived the catastrophe, the toxic gas leaked into the bunkers , causing them to perish.

Digging for the city

Both men were convinced that this legend was real . If the information captured by Shufelt’s device is added to that , all was said.

On February 21, 1933, they got permission from the County Board of Supervisors for the excavation to begin. Any treasure found was to be 50% shared with the City of Los Angeles.

Shufelt was convinced that the labyrinth was about 300 meters deep . So he could find the rooms of 2.5 square kilometers. Where the most valuable treasures were hidden.

The legend about this reptilian city tells how the rooms sheltered historical tables of gold . In them were important engravings on the origins of humanity . These boards were 1 meter long and 35 centimeters wide.

Shufelt mapped out the ideal place to dig as his device had located the empty areas of the tunnels and dark areas where the gold was found .

When the excavation began, the water had seeped into several tunnels. Arriving to flood several rooms.

The journey of both subjects had reached the media. In early February 1934 the first reports came out of the “Lost Land of the Lizard People.”

By that time , 100 meters had been dug in one of the five pits being dug at the same time.

However, when there was more attention on the underground reptilian city, the project was stopped at any moment. The excavation was abandoned and on March 5, the pits were backfilled once more.

Shufelt continued to reside in Los Angeles, passing away in November 57. Leaving a legacy that, despite his continuous legal struggles, he could never continue.