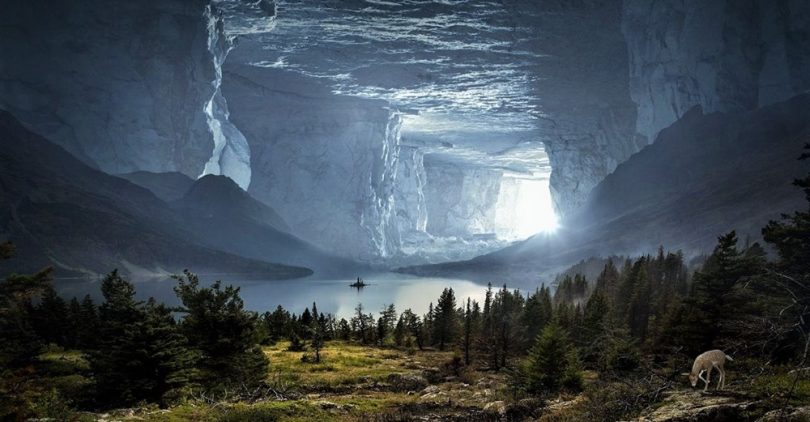 Many experts, theorists and researchers have debated what is in the center of our planet. Does the Hollow Earth exist and does a civilization with its own Sun inhabit it?

Since the 18th century , the scientific community has debated the possibility of an unknown kingdom called Hollow Earth.

Following the publication of some photographs taken by the ESSA-7 satellite in the 70s, where the clear sky was seen at the North Pole, a large hole was revealed where the Pole must have been.

Entrances to the Hollow Earth

After ESSA USA published the images, the controversy began. Scientists, independent researchers and theorists debated the existence of this perfectly circular hole in the Arctic.

Ray Palmer, ufologist and editor of Flying Saucers magazine, said that NASA photography was the propitious evidence to consider theories about the existence of underground and advanced civilizations .

Considering that there was already a story from 1928 , narrated in the diary of the polar explorer, Admiral Richard E. Byrd , the evidence is accumulating.

Byrd said that while he was flying over one of the poles, he was able to see immense and wonderful valleys and prehistoric animals inhabiting the area.

For many, this story caused a great impact and raised a wave of theories about the existence of the Hollow Earth.

After the writing on Byrd’s experiences was found, many articles and books related to the subject were published. Like those written by Amadeo.

In Giannini’s book “Worlds Beyond the Poles”, it is stated that the explorer did not just fly over the Arctic. It had been able to access the center of the Earth through one of the many holes in the place.

By December 1959, a theory was published in Ray Palmer’s magazine that it related to Giannini’s book and the Hollow Earth. Its resounding success showed that thousands of people believed in the theory.

According to Palmer and Giannini, Admiral Byrd radioed that under the snow there were areas of land, vegetation, mountains, lakes, rivers, forests, and a strange mammoth-like animal.

Since the 14th century, the person responsible for discovering Halley’s Comet, the accredited Astronomer Royal of England, Edmund Halley , proposed the theory of the Hollow Earth theory.

He also said that inside was divided into 3 cones centered and the medium was molten lava that was serving as an inner sun . This theory was supported by Newton himself .

Leonhard Euler, an 18th century mathematical genius, also supported the Hollow Earth theory. He further stated that at the poles of the globe there were two openings that served as entrance .

Aside from myriad scientific hypotheses, The Hollow Earth idea has served as a muse to a variety of artists and writers. Jules Vern e’s Journey to the Center of the Earth , from 1864, is one of the most famous works that talks about it.

Investigations are currently continuing to discover what is hidden under the earth’s mantle.

A project spearheaded by the former Soviet Union in 1965 consisted of digging a 15-kilometer deep well that they called Kola . The results of this study were not publicly disclosed, but it is believed that “human and animal voices” could be heard through ultra-sensitive microphones.

However, science has also contradicted itself in this regard. Some claim that every 30 meters, the temperature increases by one degree . If this is true, the Earth’s center should reach close to 220,000 degrees Celsius .

This would make the center of the planet much hotter than the Sun , whose crust reaches 6,000 degrees Celsius .

There are many questions regarding this theory, especially due to the silence of the special agencies and the restrictions they place on investigators.

Why do they forbid flying over the poles? What is really hiding? And especially could we share our world with another totally different civilization without even knowing it?