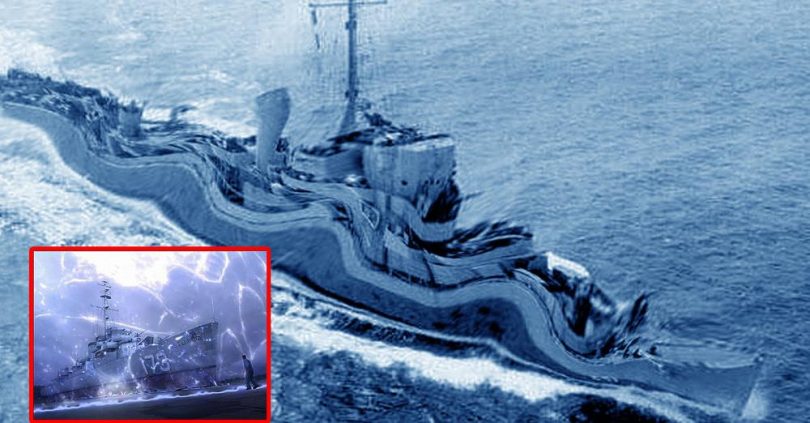 In the middle of World War II, “an American battleship put a technology designed by Einstein himself to the test and managed to become invisible and teleport.” This is how the “Philadelphia Experiment” was born.

This is, at least, what some conspiracy theorists say. Here is the true story of the USS Elridge, the ship that “traveled back in time”:

Legend has it that the military were testing an electromagnetic field generator with which they were trying to find practical applications to the unified field theory proposed by Albert Einstein.

In one sentence: they wanted to achieve invisibility.

Private technicians who would not know what they were installing would equip two powerful generators, dozens of meters of electrical cable around the hull and other complex electronic devices to the USS Elridge, a 93 meter long battleship.

On July 22, 1943, the first supposed experiment would take place.

“The generators activated an electromagnetic field that made the battleship disappear from view for a few minutes surrounded by a greenish mist.”

“Some sailors complained of severe nausea caused by the test.”

“The equipment was readjusted and the second test took place on October 28. This time, the entire ship completely disappeared and appeared at the navy base in Norfolk , 600 kilometers away and 15 minutes in the past. ”

“He was sighted there during that time. After that he disappeared again in the middle of a blue lightning to return to Philadelphia ”.

Official statements from the navy

As they say, the consequences of this second experiment were so devastating for the crew that the Navy decided to cancel the project.

“Most of the sailors developed schizophrenia and some completely lost their minds.”

“Many were seriously injured when they materialized, and others, less fortunate, fused horribly with the ship’s hull.”

“Some faded days after the experiment and never reappeared.”

This is, broadly speaking, the gruesome story perpetuated by theorists, ufologists, and some science fiction movies. The navy has always denied the existence of the Philadelphia experiment.

In a statement released in November 2000, the Navy Office of Naval Research (ONR) completely denied the existence of any invisibility or teleportation programs, as well as Einstein’s involvement.

But between 1943 and 1944, Einstein worked as a part-time consultant for the navy on theoretical research on explosives and blasting.

Of course, there is no evidence that Einstein has worked on anything related to invisibility or teleportation.

How did the Philadelphia Experiment come to light then?

The answer is through a series of letters sent by Carl Meredith Allen under the pseudonym Carlos Miguel Allende.

Allegedly, Allen was a merchant marine who saw the USS Elridge disappear from his own ship, the SS Andrew Furuseth.

Allen described the alleged teleportation experiment in a correspondence with the writer and ufologist Morris Jessup.

Although the marine never provided any credible proof of what he said, Jessup was fascinated by the story and included it in a book called The Case For The UFO. Continue with more information in the following video: