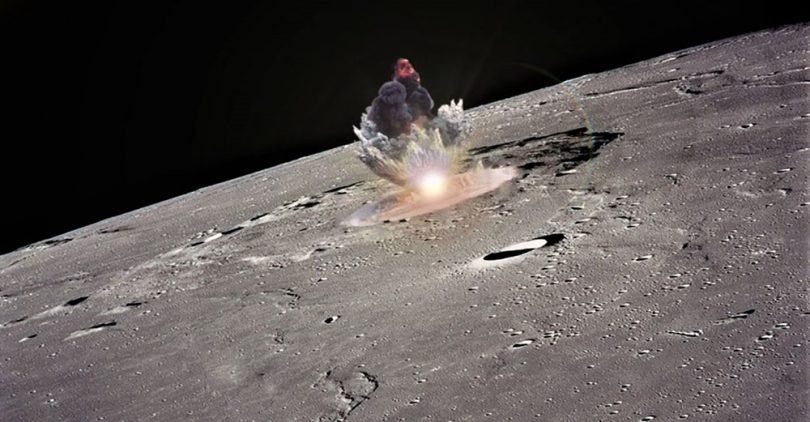 Since 2017, ESA’s NELIOTA project has regularly detected “flashes and impacts” on the Moon’s surface from small asteroids.

The reason they are investigating meteorite impacts on the Moon is to get an idea of ​​how common these objects are and their potential threat to Earth.

Earth is constantly bombarded by natural space debris. Most are destroyed as they pass through our atmosphere, but some objects are dangerous and it is unknown how many surround us.

They are too unpredictable and small to detect before they approach Earth.

For this reason, the NELIOTA project observes the impacts on the Moon and with the data they can make an estimate of how common they are and how dangerous they are.

Recently, the Sharjah Lunar Impact Observatory (SLIO) telescope in the United Arab Emirates has detected a series of impacts on the moon, but what is distinguished is that this series of impacts occurred in one minute and were brighter. usual.

Furthermore, their flash periods were relatively long, as periods of up to a quarter of a second were recorded at each impact, and this is considered a long time for such events.

It is notable that these impacts propagate in the middle of the dark east side of the Moon at the time of observation and extend for a distance of 1000 km on its surface.

According to Professor Hamid MK Al Naimiy, Rector of the University of Sharjah, Director General of SAASST and President of the Arab Union of Astronomy and Space Sciences, the team has analyzed the timing of the impacts and their relative positions and, based on this , have concluded that the series of impacts are caused by meteorite impacts, reports khaleejtimes.

We live in a strange world and, as Neil Armstrong once said , “There are great undiscovered ideas, and breakthroughs available to those who can remove one of the protective layers of truth . “

What do you think hit the moon, meteorites, or something else that crashed onto the lunar surface? Check out the video below and leave us your comment below.