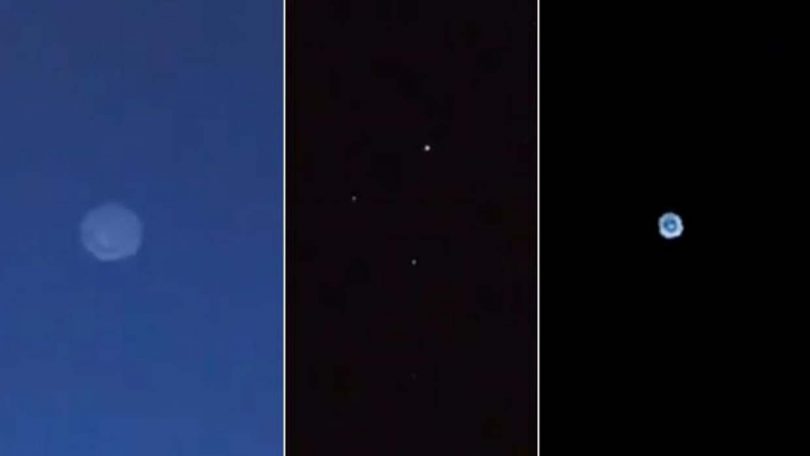 Something really strange is happening during the coronavirus pandemic and it is impossible to hide it. Thousands of people are already witnessing the presence of strange objects in our skies. They are not about drones, planes or helicopters, and so far there is no explanation. Even these sightings have been seen in full news, As we already published in MEP, on May 8 during the news of the Spanish television channel Telecinco , a luminous object in the form of a disc appeared passing over the Roman monument Castillo de Sant ‘ Angelo, located on the right bank of the Tiber River.

Generally, this type of evidence is not mentioned by the media involved, but in this particular case it was discredited a few days later by the television network itself due to the stir caused on social networks. According to the journalist’s explanation that was in the place, the strange object was simply a seagull, although he did not even see it since at that time it was on its back. This is simply one of the large number of sightings being seen during the pandemic and around the world. But it seems that “something” is about to happen, since having seen a single unidentified flying object we have passed hundreds, and in the same country.

Brazilians in the Magé municipality, just north of Rio de Janeiro, reported seeing mysterious light objects in the night sky on Wednesday. Social networks were filled with dozens of videos of the strange objects, causing panic and all kinds of reactions to the presence of UFOs. Magé became trending on Twitter Wednesday morning when several people began sharing videos of bright lights in the sky. The images showed blue, red, and yellow orbs moving around the sky, even the lights in a triangular formation.

While the videos themselves are truly impressive, the real controversy started after the posts inexplicably disappeared , including the hashtag #MageUFO. On the other hand, in the Reddit category on UFOs, the publications of the Brazilian videos also began to disappear. Users accused Twitter and Reddit moderators of censorship. Twitter also declined to give any explanation.

While the Brazilian press reports that no one reported these objects to local authorities, there were many who said they had heard loud explosions and gunshots , in addition to witnessing how the military cordoned off the aurea and arrested anyone who tried to approach the place where the strangers appeared. lights.

The truth is that more and more UFOs are being seen around the world, but the recent event is the most puzzling to date. It must also be said that Brazil is considered an important point for UFO activity . In 1957, journalist Ibrahim Sued received an envelope containing small pieces of metal from an anonymous source claiming that they were remnants of Ubatuba, in the Brazilian state of São Paulo, where an UFO had allegedly crashed. Although they were of extraterrestrial origin, the fragments were very pure magnesium.

It is unclear where the metal came from and it remains a mystery. The “UFO alert” Colares 1977 made headlines when residents on the island of Colares began to report strange objects in the sky and mysterious injuries on their bodies. According to researcher and computer scientist Jacques Vallee, the objects witnessed on the island allegedly killed several people. Reports of radiation and thermal burns, as well as strange scars, filled the Brazilian government’s file on the incident.

After an official investigation, the government concluded that it found no evidence of unusual phenomena. But one of the strangest cases occurred in 1996 when several people claimed to have witnessed a strange alien creature wandering the streets of the city of Varginha. Described as the “devil” the 1.5-meter-long, big-skinned, brown-skinned being was first seen by three women on a January afternoon. Several other sightings were reported, and even the US Wall Street Journal reported the story.

While this latest UFO incident from Brazil will likely add to the countless mysteries that haunt the skies of South America, skeptics say the lights on Magé were simply paratroopers equipped with pyrotechnics, Chinese lanterns, or drones. But many of us feel that “something” is about to happen , and the pandemic is simply a “smokescreen.”

What do you think about the strange lights on Magé? Are you one of those who feel that something is about to happen?