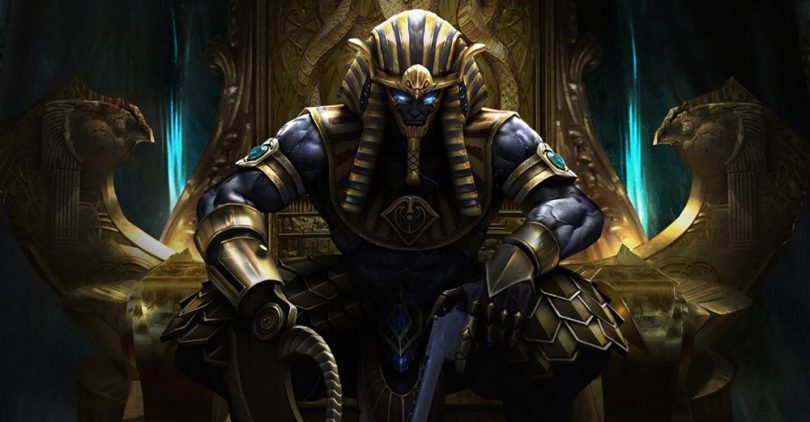 Ancient Egypt has many mysteries, but few people know about those related to one of the most enigmatic pharaohs of the Third Dynasty: Sa-Nakht, the giant pharaoh.

He ruled during 2,650 BC. C. as Jesesemuy’s successor. The story about Sa-Nakht tells us that he was on the throne for 18 years … for the rest, it is only known that he married Initiates.

The discovery of his tomb came as a surprise to archaeologists; In 1901 , in the vicinity of Beit Khallaf , a series of tombs belonging to the Third Dynasty were found .

However, one of the tombs was the one that attracted attention, since its dimensions were much greater than the rest and than all those found in antiquity. It was the tomb of Sa-Nakht.

Sa-Nakht, according to studies, was around 1.90 meters tall . Although he is currently not a surprising stature, for the time, he was a giant.

The discovery of such a man has been unique for millennia. This led to careful study.

There are certain inconsistencies with the finding of the giant pharaoh. The first is the place where the grave was found. For example, his grave was supposed to be located at Abu Roash.

Another of the inconsistencies related to Sa-Nakht comes from his own size . Generally speaking, the average height of Ancient Egypt was around 1.60 meters due to eating habits.

But the bones found were extremely long. From that moment on, the scientific and anthropometric fascination for the giant pharaoh was born.

Each part found was studied, especially the cranial measurements. When the existing data on the anatomy of ancient Egyptians were compared with that of Sa-Nakht, they found that their size was abnormally large .

Its dimensions were totally out of the Egyptian average. It was too high .

Further testing revealed a suspected abnormality in the jaw region. This led experts to assume that he suffered from acromegaly.

Acromegaly is a pathology that causes the pituitary gland to generate more of the hormone somatropin than necessary, causing a disproportionate growth of the body.

This pathology manifests itself especially on the face, head and extremities. It can also generate defects in organs.

However, in Sa-Nakht’s case, except for the “anomaly” in his jaw, the rest of his body matched the length of his limbs perfectly. His body was proportional .

Sa-Nakht Descendant of the Nephilim?

No record or mention of malformations was ever found in Sa-Nakht during his childhood or adulthood, further complicating matters for scientists.

But the investigations in the remains of the ruler continue and, in fact, they will soon carry out an analysis of the genetics of this character. This would confirm once and for all whether he suffered from acromegaly or was of “natural origin” in size.

Although the experts have already stated that the test will be “very complicated”, since they need DNA in perfect condition to perform the genetic analysis.

Another group of archaeologists and historians have suggested alternative hypotheses that are not very popular within mainstream archeology.

For example, it is possible that Sa-Nakht is related to the ancient Nephilim mentioned in the bible and apocryphal texts that the Christian Church does not accept as canonical.

One of these ancient texts is the Book of Enoch , which shows us a totally different view of angels, fallen angels and giants.

The text recounts the fall of the “Watchers”, a group of angels who related to human women and gave birth to the Nephilim.

These giants spread terror during their existence and ended up being eliminated during the Universal Flood . However, texts have been found in different ancient cultures that mention the survival of some .

Could Sa-Nakht be related to these ancient beings? The possibility that a descendant of a Nephilim ruled Egypt is not something that falls well within mainstream religion or archeology, so the truth is most likely to be kept hidden.