Warning: The magic method Tribe__Extension_Loader::__wakeup() must have public visibility in /homepages/20/d746359503/htdocs/clickandbuilds/MysteriousThings/wp-content/plugins/the-events-calendar/common/src/Tribe/Extension_Loader.php on line 157
 Strange objects are falling from the sky all over the world and nobody knows what they are – Mysterious Thing 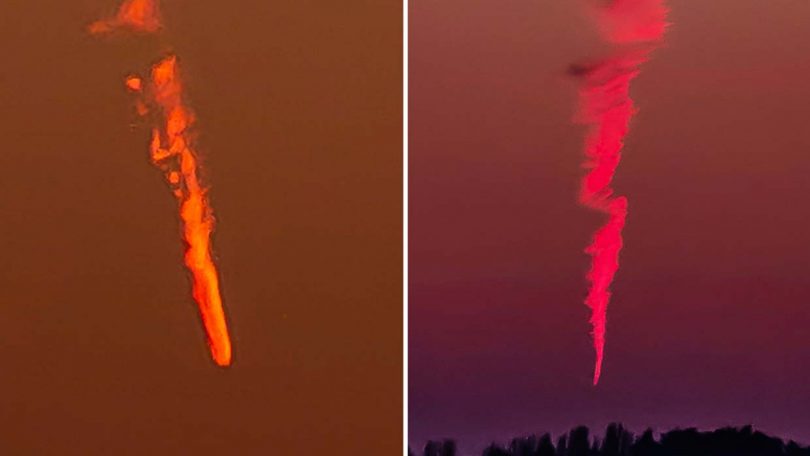 If you are someone who senses that the coronavirus pandemic is the prelude to something much bigger, you are not alone. There are many who in the last days have a strange feeling that something is about to happen, and nothing good. As we have published in various publications, most premonitions predict events that are likely to happen in a very short space of time. Although psychics are more susceptible to this type of “gift” , the truth is that anyone can experience premonitions.

People who regularly experience premonitions determine how long the delay is between “feeling” and the resulting reality. For example, on September 11, 2001 , one of the most tragic events in the United States occurred. 21 days earlier, many people suffered from strange nightmares and unexplained feelings of anxiety. This leads us to the theory that deadly important events can trigger massive premonitions in which many people in the affected community foresee an impending tragedy or disaster. And perhaps, what is happening in our skies in the past is an announcement of what is to come.

Gerry Underwood, 55, saw a mysterious burning object at approximately 8:00 p.m. local time last Wednesday in the English town of Stretham, in the county of Cambridgeshire.

“It seemed like a very thick chemical trail to begin with,” Underwood explained to the British newspaper Daily Mail . It looked like a short thin cloud. He was not moving fast at all. I’m pretty sure it wasn’t a meteorite, because it was gone in seconds. We’ve seen hundreds of shooting stars, but it definitely wasn’t that either. This was going down very slowly and in a spiral. It started to glow orange, as you can see from the photos. There were also flames coming out of the back. It was really unusual. ” Underwood photographed the striking burning object as it fell from the sky, leaving behind a huge trail . In addition, he observed how it fell slowly between 10 and 20 minutes. The apparently inexplicable object then disappeared behind a forest. Underwood said he was looking towards Huntingdon as he watched him descend. He also emphasized that the object could have fallen much further.

“The overall size is what impressed me,” Underwood explained. “When you look at the pictures, they show the trees in the foreground and it’s beyond that, it was very big. It fell beyond the horizon, that’s how big it was: we couldn’t see it land. ”

Experts in the field have proposed multiple theories for the strange sighting. These include meteor showers, shooting stars, fireworks, airplane trails. Some even suggested that it was the trail left by a troubled alien source ship . However, astronomers offered another explanation.

“The burning object moving through the sky on Wednesday night is a lot like an airplane trail to me,” said Dr. Robert Massey, deputy executive director of the Royal Astronomical Society. “While it is impossible to say exactly what the object is without further evidence, it looks like an airplane trail lit by the setting sun.”

However, the sighting in Cambridgeshire is far from the only one. This Tuesday, the Des Moines National Weather Service, Iowa, United States, published on its Facebook page the image of a strange object falling from the sky . According to the publication, the sighting occurred at approximately 6:20 a.m.

“There may have been a meteor in eastern Iowa earlier this morning,” wrote the Des Moines National Weather Service. “Has anyone seen anything?”

According to some experts, the lyrid meteor shower is this week and peaks on Wednesday night, so this fireball could be part of this annual celestial event. Many netizens have highlighted the strange similarity between the Iowa and Cambridgeshire object, suggesting that they may have been fragments of an asteroid approaching our planet . As we have already published in MEP, NASA warned that one of the largest and most dangerous asteroids it has detected is heading towards Earth.

The asteroid in question, identified as  52768 (1998 OR2)  , is currently being monitored by NASA’s Center for Near-Earth Object Studies (CNEOS). According to the agency, this asteroid is currently moving at a speed of 31,320 kilometers per hour. It has an estimated diameter of 4.1 kilometers. CNEOS noted that this mountain-sized asteroid is expected to pass close to Earth on April 29, 2020 . Although it seems a very safe distance, the 1998 OR2 is classified as a potentially dangerous asteroid. And if the asteroid’s current trajectory changes slightly, which can easily happen due to gravitational forces in space, it could end up hitting Earth.

Given the size and speed of the asteroid, an impact caused by that space rock would create a crater at least 50 kilometers wide. The massive explosion of the impact would generate violent earthquakes . It would also send molten debris into the atmosphere in different parts of the world. The intense heat wave from the explosion would travel hundreds of kilometers, incinerating everything in its path. Eventually, dust and debris would cover the planet, preventing sunlight from penetrating and reaching Earth’s surface. This event, known as nuclear winter, would last for several months and could lead to the death of most species on the planet. We are talking about an extinction level event.

It is true that so far NASA has said that 1998 OR2 does not pose a threat to our planet, but it is also true that many believe that the coronavirus pandemic is a “smokescreen” for impact . We must remember that most of the astronomical observatories are now closed due to confinement, something unprecedented in our entire history. And who knows, maybe it is the cause of thousands of people having a feeling that something is about to happen.

Is there a relationship between these strange objects and the 1998 OR2 asteroid?