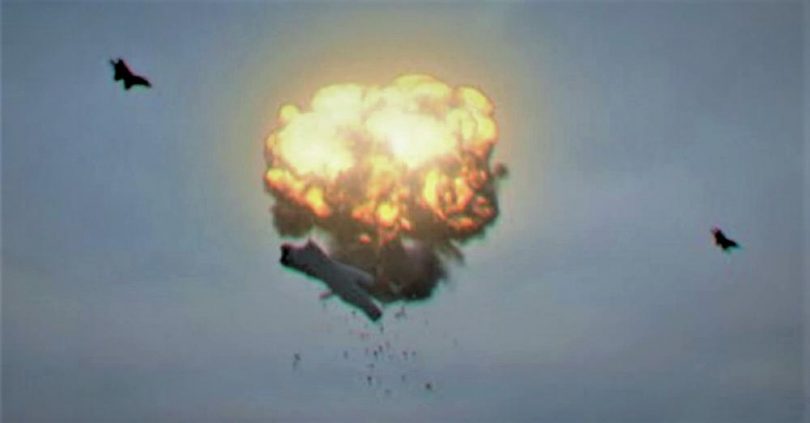 Something intriguing was published recently. A video allegedly taken by an infrared technology camera (FLIR) “captured 4 UFOs” above the sky over Afghanistan.

At one point, two of these unidentified flying objects are hit by a missile, but it does not appear to affect the UFOs. The video would have been “leaked” to the Internet from the US military archives.

The nightly military video (below) shows what appears to be an airstrike on several UFOs hovering over Afghanistan’s Kandahar province.

The objects, captured at FLIR, were allegedly spotted by the 10th Mountain Light Infantry Division during its 2011 deployment to that region.

In the video, the UFOs are seen in a static position “dripping some unknown substance onto the ground” before being hit by a sidewinder missile, fired from an A-10 Warthog, and causing no apparent damage to the UFOs.

The Pentagon has not yet confirmed or ruled on this particular video. Without more information, it is difficult to tell if the video is real, or if it is not.

If we hypothesize that the images are real, a big question comes to us, what were these strange UFOs doing on the battlefield, floating in the sky and dripping something unknown on the ground?

It is also interesting to note that a missile appears to hit two of the UFOs in a single pass, where four objects were in formation.

They seem to explode the moment the missile collides with them, but once the explosion wears off they are still up there … intact.

One of the closest hypotheses may be magnesium flares used in a training exercise with live fire.

That would explain the magnesium dripping onto the ground. They look like flares, held in place with a small parachute and slowly descending until they hit the ground.

But according to some experts there may be two possibilities:

1) some kind of energy shield has deflected the direct hit
2) an extra-dimensional series of probes. A reflection of that dimension in our domain.

Cases have been documented during conflicts in Iraq, Soviet / American Afghanistan, Vietnam, Korea, WWII, and other conflicts such as Rhodesia / S. Africa, Congo and during the Serbian affair.

It is definitely worth investigating and as viewers it is not simulated CoD FLiR game footage. Pixel and resolution are not clear enough and no game has made the Image Transition FLiR effect that good.

It should be remembered once again that UFO (Unidentified Flying Object) does not necessarily mean “extraterrestrial spacecraft”, it can also be something of human or natural origin that does not have a clear explanation of its nature.

What are we really up to? Alien technology or terrestrial experiments? Watch the following video and leave us your comment below.