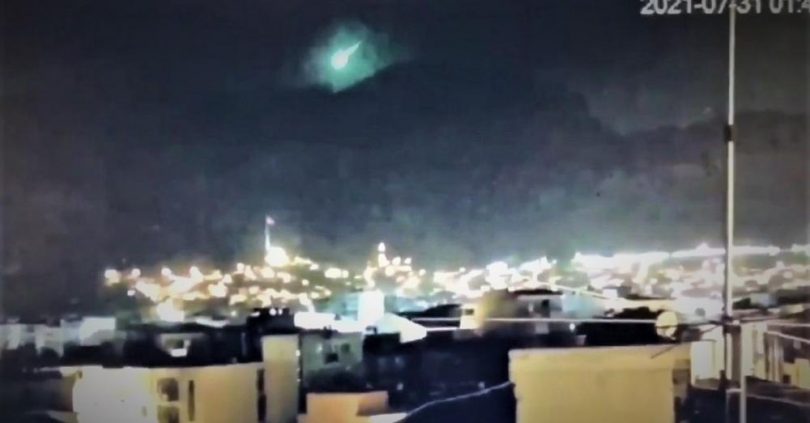 A video shows the moment when the skies over Smyrna, Turkey, lit up bright green when a mysterious object crashed into Earth.

Images of the bizarre incident that have been posted on social media show the object passing through the city of Izmir, before disappearing in a bright flash.

The seemingly inexplicable event has shocked residents, leading to speculation that the burning object is a satellite or an unidentified flying object (UFO).

The incident occurred around 2 a.m. on Saturday, July 31. One of the videos shows the object hitting the ground causing a loud explosion and changing the color of the sky to green for a few seconds.

Another video shows the object’s flare a bright greenish white before falling towards Earth.

Needless to say, the videos have gone viral intriguing netizens around the world. While many suggested it was a satellite or space junk, others chose to believe that they could be aliens.

However, Dr. Hasan Ali Dal, a Turkish astrophysics professor, denied these theories and explained a simple reason for the incredible scenes.

In a Twitter post, he said that the event known as a “fireball” occurs when a meteor begins to burn in the atmosphere.

“It usually burns in the upper atmosphere,” wrote Dr. Ali Dal. “It should be considered as a more specific version of the phenomenon known as a shooting star among people and that is often experienced during periods of meteor showers.”

According to the professor of astrophysics, the meteor could be part of the Perseid Rainfall , which occurs every year during July and August.

But it goes without saying that this explanation has not convinced everyone, since there are those who claim that it is a crashed alien spacecraft. There were even those who claimed to have seen the military in the area.