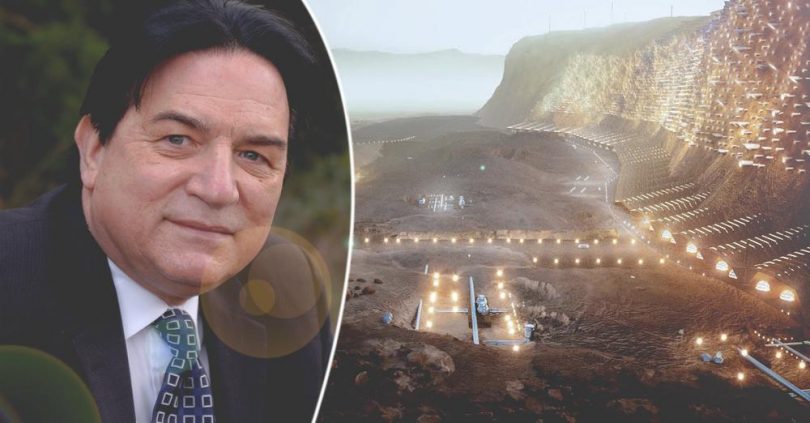 Alfred Webre was the first visionary to define Exopolitics in the world, focusing on the existence of societies with interstellar relationships. And humanity could have already created diplomacies outside of Earth, since there could be humans and extraterrestrial hybrids inhabiting Mars.

Currently, Alfred Webre, being a general counsel for the New York Environmental Protection Agency and advisor to the Ford Foundation , former professor of economics at Yale and the University of Texas, in addition to being a delegate to the Texas Democratic convention in 1996, is considered like one of the main authorities of the Exopolitics.

Currently, he is the International Director of the Institute for Cooperation in Space, or ICIS, for its acronym in English. From that rostrum, it promotes disarmament in space and the transformation of the permanent war economy to a peaceful and cooperative society . Based on the exploration of space and studying life in the Universe .

Alfred Webre: Exopolitics for the development of society

In his book “Exopolitics: Politics, Government and Law in the Universe”, Webre shows us a different vision of the Cosmos . It reveals to us that the Earth is an isolated world, in the midst of an intergalactic and multidimensional society that evolves more and more.

In addition, he affirms that the entire history of humanity that we have always been told is wrong .

In the interview in the magazine “Athanor”, where they made him an 11-page report called: “Exopolitics, the ins and outs of space warfare and a positive future”, he mentioned the Martian contacts that the near future holds for us.

Each of his statements is backed by statements from ex-military personnel, astronauts, historians, and researchers.

Simply put, Alfred Webre leaves little room for doubt about the next contact and the few years we have left for impressive revelations.

Excerpt from the interview on the revelation of Mars

Alfred Webre begins the interview with the following words:

I am 67 years old. I was born on a naval base in Florida during World War II. I live in Vancouver. Doctor of Law, judge of the Kuala Lumpur Court on War Crimes. Married, I have a son and two stepdaughters.

We live in a universe of intelligent origin . There is evidence that ethical civilizations more advanced than ours are involved in the process of our development.

Statements from employees of the United States government who have testified to participate in secret programs of relations with certain extraterrestrial civilizations.

Does that mean that there has already been contact with aliens?

Yes, since the 1950s the United States government, according to these witnesses, has been secretly working with them. Andrew Basiago , the son of a CIA officer, was enrolled at age seven in a secret program for gifted children who were trained to be ambassadors to extraterrestrial races .

He had an encounter with three astronauts from the planet Mars . In January 2009, Virginia Olds , a CIA employee, confirmed that the CIA knows that there is a humanoid civilization living under the surface of Mars.

We believe that in the year 9500 a. C. fragments of the supernova Vela entered the solar system and destroyed the ecology of Mars. The Martians, some 1,500 years more advanced than us ethically and technologically, took refuge underground.

… In December 2008 we published a report that includes photographs taken by the NASA robot Rover Spirit in which certain species of humanoids, animals and structures on the surface of Mars are identified.

Alien Contacts and How the Universe Works

Buzz Aldrin who traveled on Apollo XI said that when they reached the Moon in 1969 there were two large alien spacecraft around the great crater, his version was verified by senior NASA officials.

Why not divulge life on Mars?

For political reasons. We are going to file a lawsuit under the freedom of information laws for NASA to recognize intelligent life on Mars.

¿ And why not present in society themselves, the Martians?

Ours is a low-order planet that we assume is under a quarantine imposed by the government of the universe .

And the first contact will be with the Martians?

Yes, because there are many mutual advantages, they can give us technologies and knowledge and we have a beautiful green planet to which they can migrate .

How does the universe work?

There are many dimensions and universes parallel to ours. Some alien civilizations come from another dimension, another parallel universe , that is why UFOs can appear and disappear.

How are these more evolved civilizations?

It seems that we live in an organized universe and the most ethical civilizations have managed to dominate the time dimension and it is they who probably develop our reality.

… Well, they do it fatal

According to some theories, we are rapidly evolving away from the permanent war economy and towards a sustainable economy. Human consciousness develops to enter the universal age and openly relate to those other civilizations.

There is a primary directive: do not interfere with the evolution of a civilization on another planet. But in a very short time, man will learn to use quantum teleportation and to draw energy from space.

We are in an era of transition in which we must decide whether we are going to destruction or evolution.

Is your job to study the great government of the universe?

Exopolitics is a social science, studying the relationships between our human civilization and other intelligent civilizations in the universe. One of our first steps towards universal diplomacy will be through the Martian civilization.

I personally work with Dr. Norman Miranda , chief of staff of the president of the UN General Assembly, so that the UN represents the Earth before the civilization of Mars.

According to Alfred Webre, our planet is more like a prison and has been designed that way by intergalactic society. However, we could be about to establish relationships with other civilizations …