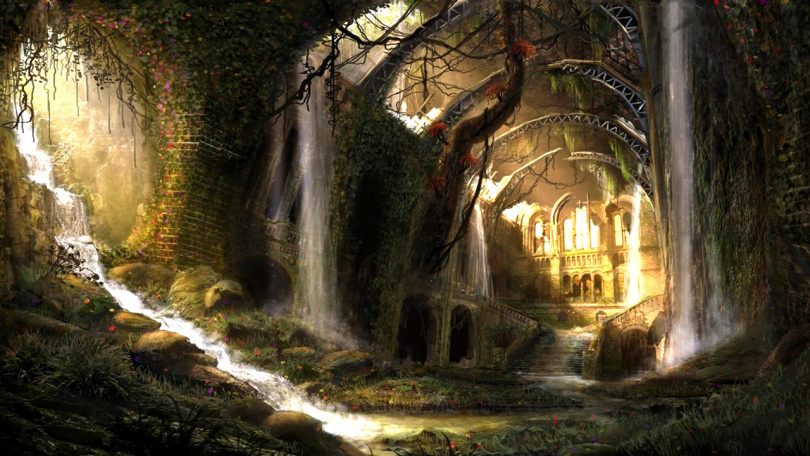 Today our article is going to touch on a fascinating underground mystery , which has Chiapas , Mexico , as the axis of a legendary story centered on the Mayan mystery , and its secrets.

Many of his references seem to link with La Cueva de los Tayos , in a subject that, as I always say, is not exhausted. I invite the reader to join me in the search for an enigmatic lost city, its golden library, and hidden tunnels.

Let’s discover the Veil of Isis.

“These people also used certain characters or letters, with which they wrote their ancient things and their sciences in their books. And some signs in the figures, they understood their things, and they gave them to understand, and they taught. Let us find them large numbers of books of these, their letters, and because they had nothing, in which there was no superstition, and falsehoods of the devil. We burn them all ”. Manuscript of Relationship of the things of Yucatan. Diego de Landa. Century XVI. 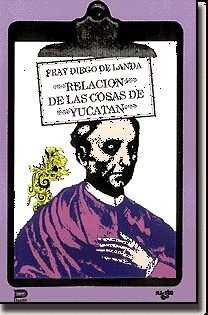 To try to understand the events that we are now going to relate, we must center our first clue on the figure of Diego de Landa Calderón . Who would later become, one of the most controversial figures of his time, came to the world in Cifuentes , Alcarría de Guadalajara , Spain , 1524-1579.

At the age of twelve he entered the Franciscan convent of San Juan de los Reyes de Toledo . When he was 27 years old, he was sent to Yucatán to begin his evangelizing mission. In the beginning, Fray Diego de Landa, tried to carry out a protective task with the natives, whom he tried to educate in the new faith.

However, frustrated by the persistence of the still latent pagan beliefs, which made his pastoral work difficult, he decided to summon an Inquisitor Court . What happened later would be recorded forever, as one of the most atrocious acts carried out during the cruel colonizing period.

“On the night of July 12, 1562, a bonfire lit up the dark streets of Maní , Yucatán . That fire was fed with sacred objects, and above all, with the forty codices in which the entire life and history of the Mayans was explained ”. 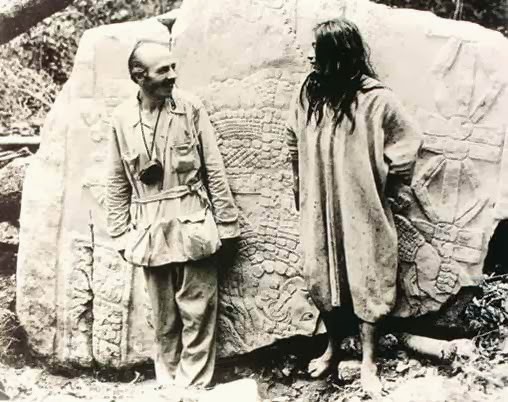 Landa was convinced that in Yucatan there existed “a clandestine network of Mayan apostates”, practitioners of the most deeply rooted Satanism. Many indigenous Mayans, subjected to cruel torture seeking to break their silence, later ended up committing suicide.

Later Landa, marked by a great repentance, would publish the famous Relationship of the things of Yucatán , 1566, presenting his personal interpretation of the mysterious Mayan language. Despite his good will, the translation proposed by Landa , considered a reputed Mayanist, would prove useless. One of the first scholars to recognize this difficulty was the French abbot, geographer and scholar, Charles Etienne Brasseur de Bouborg , 1814-1874, who admitted his bewilderment with what Landa had done .

During his stay in Chiapas, Brasseur de Bouborg , who in addition to being a missionary held the position of ecclesiastical administrator, later wrote a book, Voyage sur l’Isthme de Tehuantepec dans l’état de Chiapas et la République de Guatémala , 1861, narrating his experiences in Mexico and Guatemela , appearing inserted in it, curious references about a people of enigmatic customs called the Lacandones . 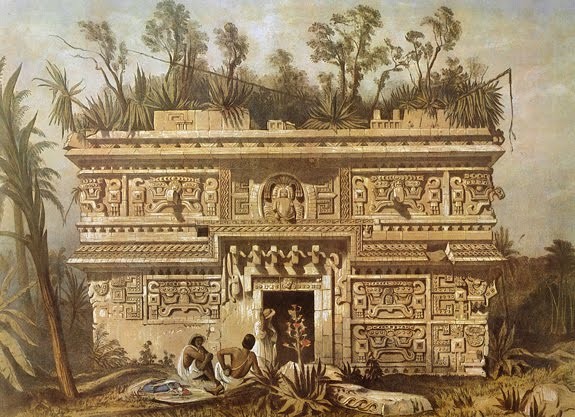 According to Brasseur de Bouborg:

“From time to time a group of natives of small stature and white skin would appear in the border cities and towns of Chiapas and Western Guatemala, bartering merchandise, and they would quickly go to their great stone temple where they said they lived, already who tried to follow them, disappeared, or turned up dead ”.

This story about a tribe alien to the traditional cultures of Central America , although similar to the Mayan ethnic group in the words of some testimonies, we will see reported by several authors, although its written transmission contains slight variations. Let’s tackle the tracks.

One of the oldest mentions about the Lacandones, a term that according to this tribe alludes to “the people of true men”, comes from a 15th century manuscript, Historia de la Provincia de Chiapas y Guatemala, by the Dominican friar Francisco Ximénez de Quesada (1550-1620), who was also a translator of the Popol Vulh, describes in this work, his encounter with a Lacandon prisoner.

With the arrival of the 19th and 20th centuries, rumors began to be heard about an ancient Mayan city lost in the Mexican jungle, guarded, according to what they say, by a mysterious people. One of the first to collect this story was the American writer John Lloyd Stephens , who, in Travel Incidents in Central America, Chiapas and Yucatán , 1841, presents an intriguing oral testimony bequeathed by a Spanish priest:

“Four days down the highway that leads to Mexico , entering the other side of the great sierra, there is a living, large and populous city, hidden underground. According to the traditional account of the Chajul Indians , no white man has ever reached her. The inhabitants speak in the Mayan language, they know that a foreign race has conquered everything, and they kill anyone who tries to enter their territory. They have no currency or other means of calculation, they lack horses, cattle, mules or other domestic animals, only poultry that they hide underground ”.

The priest also told Lloyd Stephens that a Spanish guide told him:

“They possessed a great light that shines in the underworld, the secret of which seems to have been entrusted to them long ago, by those who have previously lived underground.”

Another author who will also echo this rumor about a lost city, will be the famous British explorer and journalist, Harold Tom Wilkins , 1891-1960, who in his book Mysteries of Ancient South America , 1945, delivers revelations about a mysterious lost race, sighted in the vicinity of Chiapas , and that Wilkins identifies as linked to the Mayans or perhaps Aztecs.

“They only come into contact with Indians, barter some products, and they disappear as quickly as they arrived. Officials Mexicans and Guatemalans never comment on them. People traditionally place them as custodians of the entrance to an underground city, where an ancient civilized race lives that ruled Mexico before the waters. No foreign man knows the part of the jungle that they inhabit, where this tribe develops as their parents did, maintaining the same majestic buildings, stone, palaces and temples, large courtyards and elevated towers with high terraces of stairs, which mark the site. . This tribe still sculpts in stone the mysterious hieroglyphs that no modern scholar has been able to decipher in Yucatan ”.

At the beginning of my research on Cueva de los Tayos, I had access to certain reserved material, made up of certain pieces of Mayan origin. This legacy would have belonged to Julio Goyén Aguado , a close friend of the enigmatic Juan Móricz, who revealed to the world the discovery of a gold library in the Ecuadorian jungle, in addition to other finds.

The truth is that one of those plates accompanied by other objects, are of Mayan origin. Although it is not yet possible to elucidate all the questions, about what happened to the Cueva de los Tayos and its treasures, certain connections between South and Central America , may perhaps begin to be understood if we focus our attention on the issue of the underground tunnels. Up to this point. 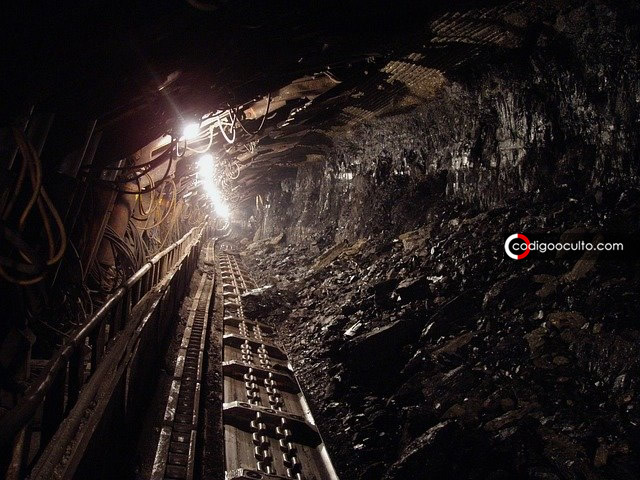 Mexico has a long underground tradition, although many of its stories are lost in legend. The history of the Mayans is still in full reconstruction, as well as their legacy that we are just beginning to discover. The decoding of its complex writing still worries the experts, which, due to the destruction practiced at the time of the Conquest , prevents us from advancing in its better understanding.

Perhaps that is why it is not unreasonable to think that the ancient Mayans believed that they preserved their documents, perhaps heirs, as some think, of previous civilizations. Chiapas and its mysteries is just the tip of the iceberg. The future may bring us surprises about this enigma, it is just a matter of waiting. To be continue.