Archaeologists recently made a discovery that looks like it is straight out of a horror film: over a dozen severed hands buried in, and around, an ancient palace in modern day Egypt.

However, the Pharaohs are not to blame, and neither are any undead mummies. Instead, many are theorizing that an ancient ritual may be linked to the piles of hands.

And all hands found are very large.
The team of archaeologists who made the discovery have determined that the bones all date back to about 3,600 years ago – an indication that they all came from the same ceremony. All of the hands appear to be abnormally large, and they are all right hands. They were sorted into four different pits within what the scientists believe was the royal Hyksos compound. 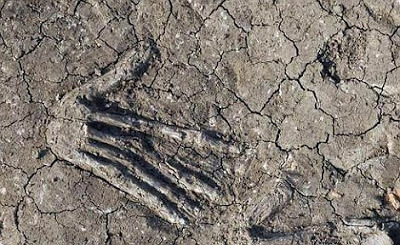 Manfred Bietak, the Austrian archaeologist in charge of the excavation of the ancient city of Avaris, explained the to journal Egyptian Archaeology that the hands seem to support stories found in ancient Egyptian writings and art. Although this would be the first physical evidence that this is true, the older sources seem to indicate that soldiers would cut off right hands and, in return, claim a bounty of gold.

Now the only question is why they would do that. Of course, cutting off the hand was a symbolic means of removing an enemy’s strength, but the meaning is likely also supernatural since this was done at a holy site and a temple as part of a ritual. 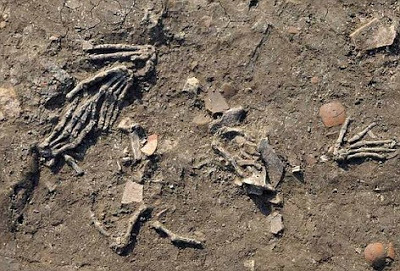 Strangely, the hands were not at all evenly distributed between the pits. Almost all of them were in two of the pits, while the other two pits only held one hand each. So far there is no evidence that would show what type of people these hands belonged to, but it is most likely that they were native Egyptians or from the people of the Levant.

When asked to explain why he thought this ritual may have been carried out, Bietak said “You deprive him of his power eternally. Our evidence is the earliest evidence and the only physical evidence at all. Each pit represents a ceremony.”

The two pits that each contain one hand were positioned directly in front of a throne room. This section of Egypt was once controlled by an occupying force that most historians believe originally were Canaanites, so there may be a connection to the invasion. The other hands, which may have been buried at the same time or at a later date, are on the outer grounds of the palace.

Now the only question is, why? How much do we know, and what is speculation? To be honest, there is a lot more that needs to be researched, but many signs point to this being some sort of ritual to a god or gods. The fact that the hands were abnormally large indicates that these people were specially selected, which is more characteristic of a sacrifice than killing an invading army.

The fact that two hands were buried separately may indicate that these offerings were intended to be especially satisfying to the gods. Finally, these sacrifices are not surprising in an area that faced foreign invasion. Egyptians would often call upon their gods to punish invading armies with plagues, starvation, or general misfortune. It is possible that these sacrifices were part of a curse against the invading armies.