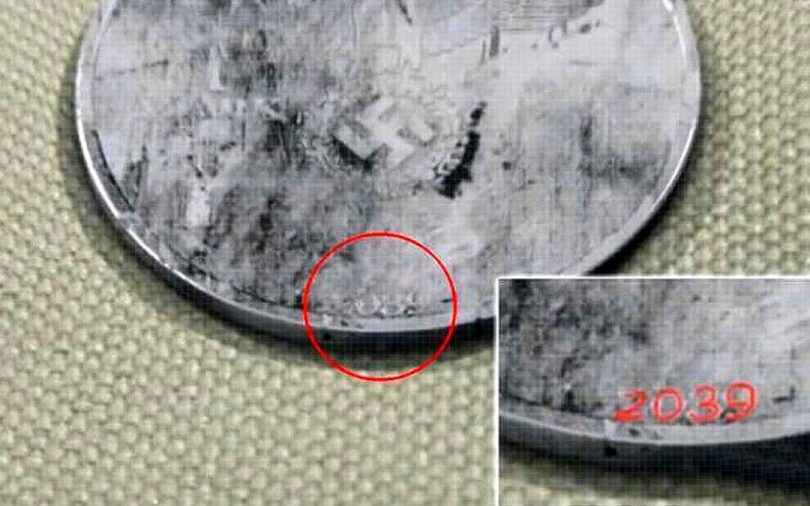 Many ooparts have been found in ancient ruins, however is it possible to find one that comes from a future other than ours? That is the case with a Nazi coin minted in 2039.

Diego Avilés is responsible for having found a strange coin in one of his works . At first glance it looks like a Nazi coin, with its swastika and slogan “alle in einer nation”, which in Spanish translates as ” all in one nation .” Only this one is a bit peculiar.

Its minting date clearly says 2039 . Taking into account this date, and the motto that can be read on the reverse of the Nazi coin, is it possible that he traveled from a future where Nazi Germany won the war and dominated the world?

Nazi currency of the future?

In the municipality of La Concordia, in Chiapas, Mexico, there is, in fact, a town known as “New Germany,” but to date, no one pays with Nazi coins.

So how is it possible that a coin with a swastika and clear Nazi attributes is found in Mexico? A fraud? An alternative future?

Many people have claimed that the currency has been tampered with ; it would be the most logical thing to do. Modify the 1 and 9 at the beginning by a 2 and 0, so that, instead of 1939, it says 2039.

However, changing two numbers is something very different and much less complicated than adding a complete phrase to it .

The people of New Germany were born thanks to the German immigrants who arrived in Chiapas in the 1920s. However, at no time did any of them trade in Nazi coins in Mexico.

Not even the commercialization of oil between both nations introduced the Nazi currency of the time in the North American nation. Their presence just doesn’t make sense.

Quite simply, the coin found by Avilés does not fit into anything historical. Not even in the legal tender frameworks during the war , even though it has similarities.

Is this an oopart in our era? Let us remember that this is what objects are called ” outside their time line ” or that do not belong to the epoch attributed to them.

There are many of these discoveries, most belonging to ancient times, such as the Antikythera mechanism , a kind of ancient analog computer found in 1900.

However, an oopart from a future beyond the present had never been found . Reason that has generated a multitude of theories.

At the moment, the University of Mexico is analyzing the Nazi currency to determine its origin.

Is it possible that this coin came from an alternate future where the Nazis ruled the world? Or is it a simple fraud? However, the mystery is still present and until there are official versions, we will not be able to know where it comes from.