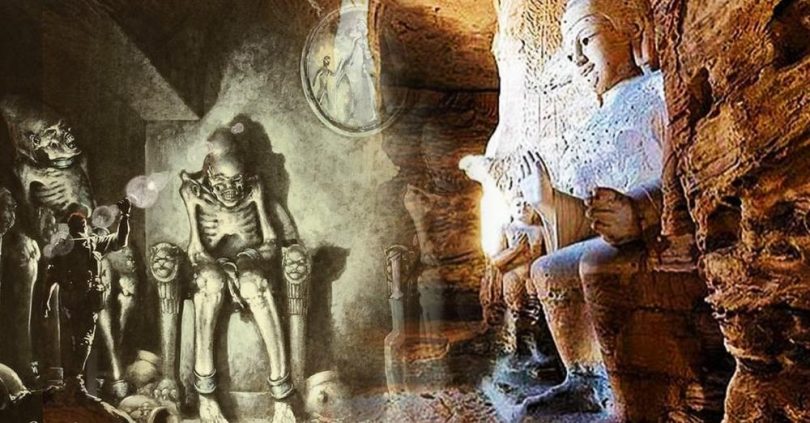 The existence of giants has always been a controversial topic for archeology, but finds such as the “Underground City” discovered in the Grand Canyon would show that “the truth always comes out.”

At the beginning of the last century, the explorer GE KInkaid discovered the entrance to a mysterious underground city of giants.

An article published in the Arizona Gazette on April 5, 1905, mentions the existence of an ancient civilization that lived in the territory of the Grand Canyon thousands of years ago.

The members of this civilization were disproportionately large . And that is demonstrated by the large number of colossal structures that they left behind.

The article mentions that his find was accidental. GE Kinkaid was rafting down the Colorado River when he came across her. The explorer and archaeologist had a large capital financed by the Smithsonian Institution , so he did not hesitate to begin exploration .

According to his descriptions, the entrance to the mysterious city was at the end of a tunnel that extended up to 1600 meters under the ground .

The almost inaccessibility of the entrance was something really surprising. It was about 450 meters below the canyon peak . The area was fully protected by the government and anyone who tried to enter was fined.

The details of the architecture found at the site suggested to experts that those who built it must have used advanced engineering .

The center was formed by a chamber of colossal dimensions . Corridors that formed a kind of “wheel” emanated from this.

The walls of the main chamber had copper weapons and tablets covered in Egyptian symbols and hieroglyphs .

But what most surprised the experts was the discovery of giant mummies sheltered inside the city. The smallest body was 2.74 meters tall and all were covered in a dark linen fabric.

Kinkaid took photos of one of them thanks to his flashlight. But none of the images were “found” any time later.

More than 30 meters from the entrance, a cross-shaped room several meters long housed a kind of monument to an unknown god .

He was sitting cross-legged with a flower in each of his hands. The face seemed to be oriental, which was reminiscent of Buddha . However, experts could not find another similarity .

The Arizona Gazette article also mentioned the discovery of ceramic sculptures and other artifacts made in different parts of the planet .

This has led experts to think that it is most likely a kind of mixture of different cultures. Something is never seen before in archeology.

The last chamber could be explored as a kind of ceremonial crypt, which was at the end of the large hall where the mummies were.

Obviously, the article in question does not give many details about the find. Nor have they been able to find other versions or statements of the officials who participated in its discovery.

Smithsonian says it does not have any information about the existence of the underground city of giants.

Is it a simple made-up item? A science-fiction story? It is something that we will not be able to confirm.

However, the rest of the findings around the world suggest that the possibility that the discovery is real and has been the victim of a cover-up .