Warning: The magic method Tribe__Extension_Loader::__wakeup() must have public visibility in /homepages/20/d746359503/htdocs/clickandbuilds/MysteriousThings/wp-content/plugins/the-events-calendar/common/src/Tribe/Extension_Loader.php on line 157
 Giants in Ancient Egypt? A “mummified finger” could confirm this – Mysterious Thing 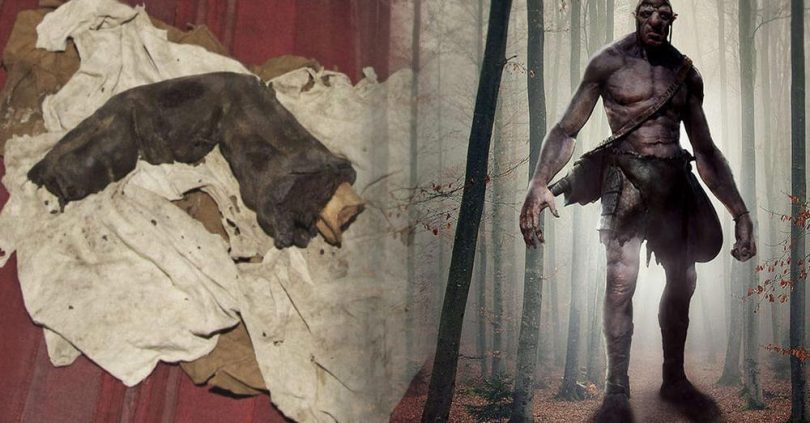 The belief in giants does not go back to a simple myth. There is a lot of archaeological evidence, accepted and unrecognized, that suggests its existence. That is the case of the colossal finger found in Egypt.

Scholars of ancient cultures that inhabited the world thousands of years ago are convinced that giants roamed the Earth .

Although science recognizes the existence of abnormally large men through gigantism, archaeological evidence, which has not been accepted by the mainstream, shows that it was not a disease.

This could be the case of a strange mummified finger found in Egypt , which has dimensions that exceed those of the average human.

In March 2012, the German magazine Bild published an article claiming that the remains of a giant had been found in Egyptian territory.

The finger, which was mummified, had all the characteristics of a human, except its size, which was 15 inches long .

According to the publication, the photographs are dated 1988 , but these had never come to light, until the newspaper was able to get them.

The images were taken by the Swiss businessman and fan of the history and culture of ancient Egypt, Gregor Spoerri.

In 1988, she says, one of Egypt’s private providers, Bir Hooker, promised to arrange a meeting with a former grave robber .

The meeting took place in a small house obtained by Hooker, 100 kilometers northwest of Cairo.

The businessman received a large bag with a rather strong smell. Opening it, he found the huge finger wrapped in rags. Obviously, Spoerri decided to cancel the $ 300 the man demanded to take some pictures of them.

To check the size of the finger, the man placed a 20 Egyptian pound note next to the finger. This one was dry and very light , but intact. Soperri assured that the creature must have been at least 5 meters tall .

Its veracity was proven when the looter showed an X – ray of the mummified finger, which he performed in the 1960s. He also showed the certificate of authenticity .

A race that walked the Earth?

Although the businessman asked him to sell the relic, the man refused, claiming that the value it had for his family was priceless .

Later, Spoerri showed the images to colleagues and specialists, who rejected them . They all argued that it was simply “impossible” for someone that size to exist.

In 2009, the businessman once again visited Hooker to obtain new photographs of the giant toe. However, he was unable to find the looter.

Although this story sounds pretty incredible, it is not the first time that giants have been talked about in ancient Egypt.

In the year 79 d. C., the Roman historian, Josefo Flavio , wrote that the last member of the race of the giants lived in century XIII a. C., during the reign of King Josué .

In addition, he said that they had colossal bodies and their faces were so different from humans, that looking at them generated astonishment and their voice provoked fear.

Scientists claim that the giants are nothing more than fictional characters, since there is no evidence that hominids have grown to such dimensions. However, the enigmatic findings that could prove otherwise are piling up .