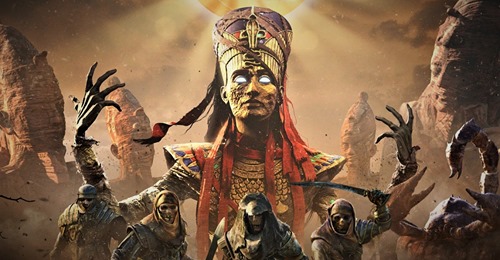 How did humans move blocks of tons of weight when building the pyramids ? That and other questions have led us to question the existence of giants in Ancient Egypt.

History has led one to think many times that the rulers of ancient Kemet were not ordinary humans.

Elongated skulls , others described as almost spiritual beings, and others as giants . And to support this theory is one of the legends that tells how the Pyramids of Giza were built at the hands of a race of giants.

This theory was shared during a lecture called “Atlantis and the Ancient Gods” by the occultist and Mason, Manly P. Hall.

Hall stated that in AD 820, the Great Pyramid of Giza was opened by El-Rashid Al-Ma’mun, a descendant of the great El-Rashid of the Arabian Nights. He had been told that it was built by giants known as Sheddai and that within them awaited a treasure beyond human knowledge .

Although it is true that in the year 832 d. C. Al-Ma’mun traveled to Egypt and was the first to explore the Great Pyramid at a time when it was still covered with white limestone, who are the Sheddai is a mystery that continues to be present.

Some say they were the followers of Horus , others the King of Ad, who was said to be the ruler of the lost city of Iram of the Pillars . An account mentioned in sura 89 of the Qur’an, where he is mentioned as a giant.

The monumental constructions in Egypt and their relationship with the giants 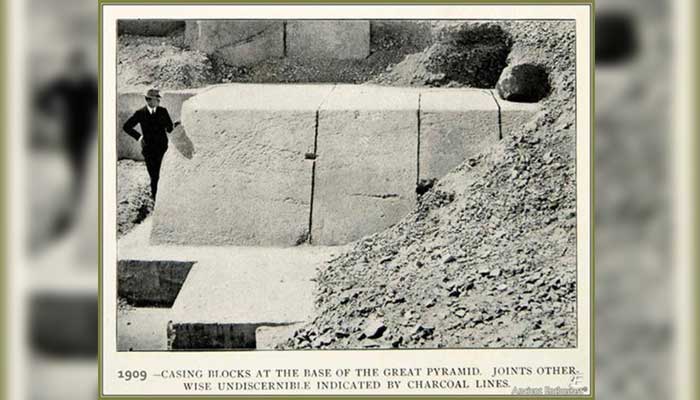 The Book of Wonders is an Arabic compilation of ancient traditions in Egypt and the prediluvian world.

Here it is said that the people of ‘Ad were giants, so Shaddad could be one of them. It is said that he built the monuments in Dahshur with the stones that were carved in his father’s time.

Before that, the giant Harjit was the one who started construction. Previously, another giant named Qofṭarīm placed the ” secrets in the pyramids of Dahshur and other pyramids as had been done in the past .” It was also he who founded the city of Dendera.

The text also mentions that the city of Memphis was built by a group of giants who lived after the Great Flood and served King Misraim, who was also known as a giant.

The cult of Horus 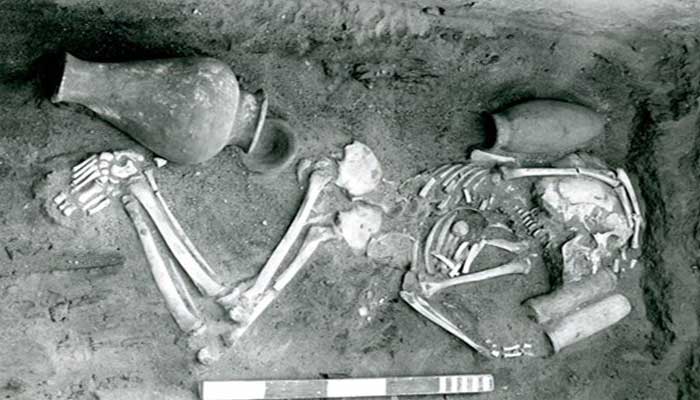 The followers of Horus , who may have created the main mound of Giza long before the pharaohs, are believed to be giants.

This is believed because at the end of the IV millennium BC. C., those called Disciples of Horus were a powerful aristocracy that ruled Egypt.

The theory about its existence is supported by the discovery of predynastic tombs north of Upper Egypt. From the remains found, skulls and constructions much larger than the rest stand out. The difference is such that any kind of common racial strain is ruled out.

In fact, Professor Walter B. Emery , an Egyptologist who explored Saqqara in the 1930s, discovered the predynastic remains.

Emery discovered that the abnormally large remains belonged to people with blond hair and a much more robust complexion . He said that the strain was not native to Egypt, but that it was very important in his government.

He discovered that this group only mixed with other equally important aristocracies and were believed to be part of the Followers of Horus. 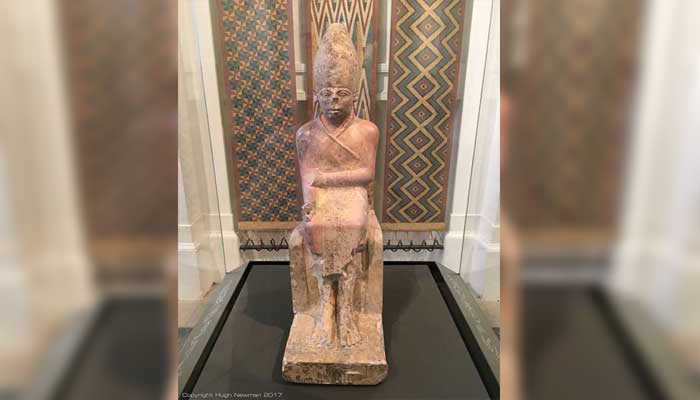 Khasekhemui was the last ruler of the Second Dynasty of Egypt , with its epicenter near Abydos. He was present in the construction of Hierakonpolis, the predynastic capital.

He was buried in the necropolis of Umm el-Qa’ab. His limestone tomb was investigated in 2001, surprising experts by the quality of the construction compared to the Step Pyramid of Djoser at Saqqara, which was dated to the beginning of the Third Dynasty.

Khasekhemui’s remains were never found, so it is believed that it was looted long before.

Flinders Petrie , who was the first to excavate the site, found evidence from the 3rd century BC. C., that the pharaoh almost reached 2.5 meters in height.

Representation of a giant in Saqqara 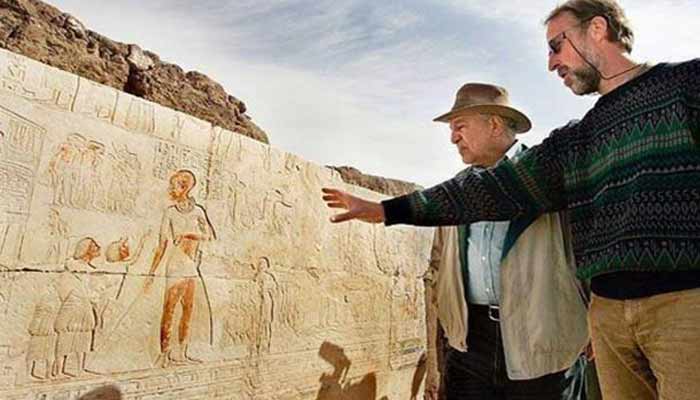 The third dynasty was responsible for the construction of the Step Pyramid of Saqqara, built with other temples in the complex.

Djoser, who was in charge of burying Khasekhemui, who is suspected of being his son , ruled Saqqara during the construction of the pyramid.

Within this complex it was possible to photograph a painting of a giant that clearly seemed to have an elongated skull.

However, this could be a representation of skeletons that were excavated in the 1930s of individuals with large skulls and complexions.

The Temple of Isis 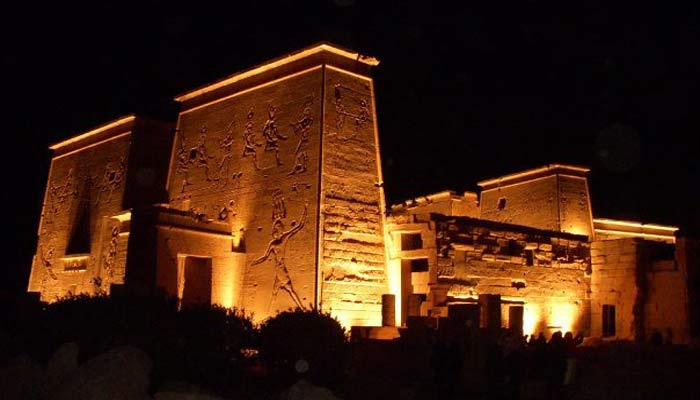 In 1895 and 1896, the world’s newspapers published a strange story about a photograph of the Temple of Isis .

The first time the article appeared was in the Arizona Silver Belt under the title ” Prehistoric Egyptian Giants .”

The article read the following:

In 1881, when Professor Timmerman set out to explore the ruins of an ancient temple of Isis on the banks of the Nile, 16 miles below Najar Djfard, he opened a row of tombs in which some prehistoric race of giants had been buried . The smallest skeleton of about 60, which were examined during the time Timmerman was excavating at Najar Djfard, was seven feet eight inches long and the largest eleven feet one inch . The tombstones were discovered in great numbers, but there was no record that even hinted that they were in the memory of men of extraordinary size. The tombs are believed to date from 1043 BC “ 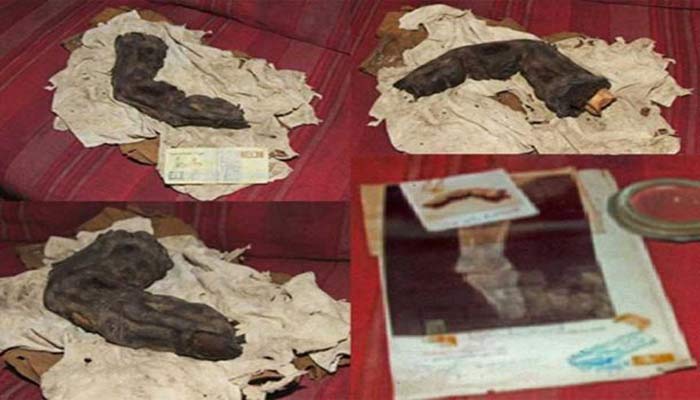 Giant finger found in Egypt revealed in 2002. Courtesy: ancient-origins.net According to the German daily BILD.de, Gregor Spörri , a millionaire who owns a Swiss nightclub, took several photos of a mummified giant finger in the late 1980s.

The owner was a retired grave robber who lived in Bir Hooker, near Sadat City. About 100 kilometers from Cairo.

The finger was 35 centimeters long , so it belonged to someone who easily exceeded 4 meters in height .

However, this finding was barely made public in 2012 , 24 years later and, since then, it has not been made official .

According to Spörri, the finger was found 150 years ago and had been in the family of the owner, who took the trouble to X-ray the finger to confirm that it was real .

The exact place where it was found was never said, but the owner mentioned a hidden room inside the Great Pyramid , where there are supposedly huge tombs , all empty. 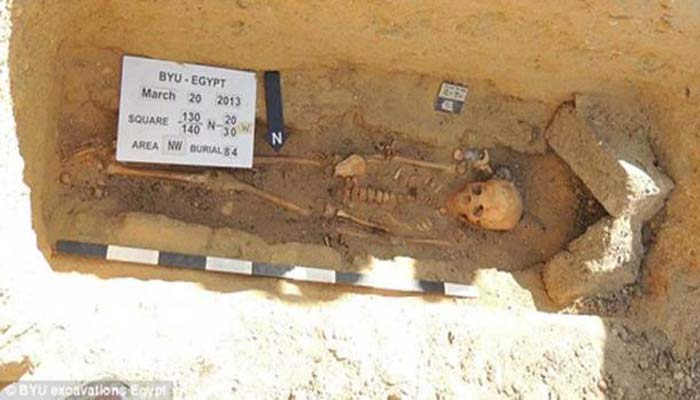 Fag el-Gamous is a cemetery close to a pyramid that has been explored by archaeologists from Brigham Young University for the past 30 years .

A large number of mummies have been found, especially from the Roman or Byzantine Empire that ruled Egypt from the 1st to the 7th century AD. C.

The number of burials in such a small place has raised many questions , especially since the pyramid is older than the cemetery.

Who they were and why they ended up buried there remains a mystery and has led to several hypotheses. Likewise, it is impossible to investigate further since the archaeologists who were working on it had their license revoked for no apparent reason

. Many say that the excavation was stopped because they had discovered the body of a giant and were revealing information . 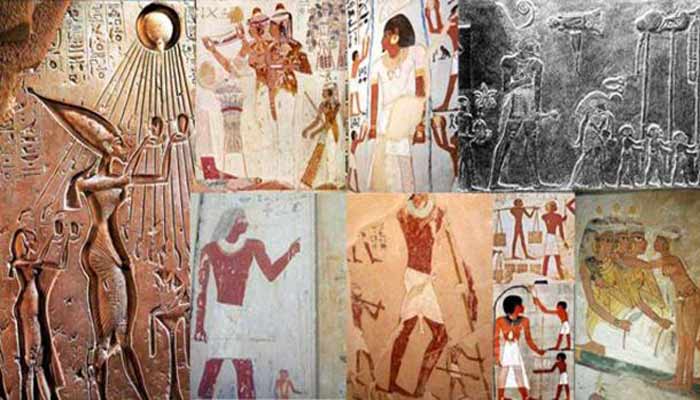 Egyptian art has many references from his day to day ; from wars to simple family meals. That is why it is not surprising that if they represented giants in them, it is because they lived with them.

In addition to art, according to various researchers, giant coffins are the most reliable proof of their existence.

In the Serepeum Saqqara there are 25 coffins made of granite and diorite that weigh up to 70 tons each and in them mummified Apis bulls were sealed as part of some ancient cult.

This has led to speculation that these coffins belonged to giants . Likewise, another huge sarcophagus was found, which is located under the Giza plateau , in a place called the “well of Osiris.”