Warning: The magic method Tribe__Extension_Loader::__wakeup() must have public visibility in /homepages/20/d746359503/htdocs/clickandbuilds/MysteriousThings/wp-content/plugins/the-events-calendar/common/src/Tribe/Extension_Loader.php on line 157
 Kap Dwa: A mysterious giant 3.5 meters high and with two heads in Patagonia – Mysterious Thing 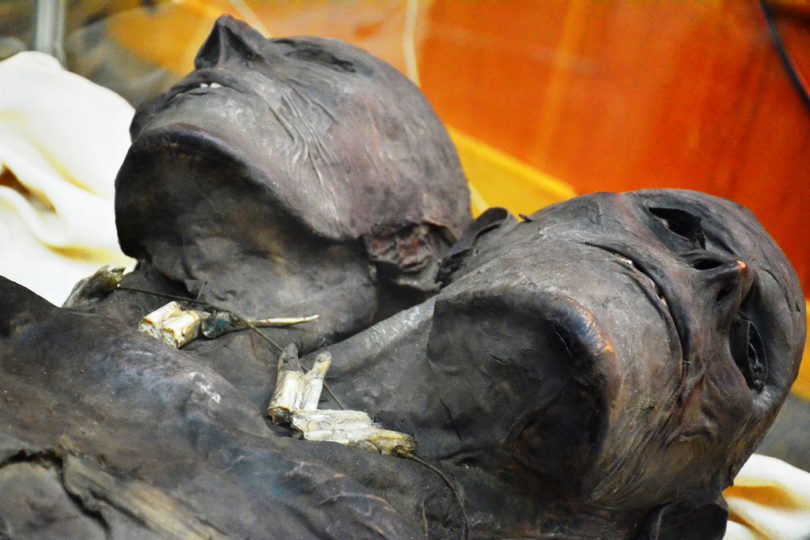 Stories about giants are many, and they are not exactly rare, but this case is one of the few where the giant, called Kap Dwa, had two heads.

The Fortean world is the epicenter of the strangest stories in the world, most of them start as fairground attractions. The American businessman and circus artist PT Barnum contributed a lot to this charade, since he was known for his taxidermy skills.
His famous creations were known as hooks, (the result of fraudulent taxidermy), offering creatures of the world straight out of legends and fiction, formed by patching together the preserved corpses of several animals emerging in what he would call the jackalope, dragons, chimeras or even unicorns. However, from the hands of hook collectors around the world this came to be what we consider to be probably the only real and also the most intriguing attraction of all counterfeits, Kap Dwa, the giant of two-headed Patagonia.

Although he was more than 3.5 meters tall and had two heads, Kap Dwa was captured in 1673 by Spanish navigators and held captive in the bowels of the
ship. The Spaniards constantly scourged him and hit him, which determined him to try to escape, but during the fight that took place, he was killed with a spear in his chest.

The following events are unclear, but their mummified remains were finally brought to England in the 19th century, where they passed through various attractions of circus phenomena, ending at the Birnbeck dock in Weston in 1914.

After being shown for the next 45 years in northern Somerset, England, old Kap Dwa was acquired by Thomas Howard in 1959, and after a few transfers he finally ended up in Baltimore, USA. Today, it can still be found among the collection of rarities at The Antique Man Ltd. in Baltimore, owned by Robert Gerber and his wife. Gerber offers a somewhat different past from the giant, although in the end it remains the same tragic event. The corpse of the only Homo giganticus was found on a beach, with a spear stuck in its chest and there is nothing certain about its aggressor. His body was later mummified and even worshiped by some locals in Paraguay who formed a kind of religion based on his remains.

The incredible rumors about Kap Dwa reached the old world, catching Captain George Bickle from the English vessel Olive Branch, prompting Bickle to claim the giant’s remains, but that was not an easy task. According to Gerber, Kap Dwa was taken to England, ending at the Blackpool Museum, where he remained for the next few years. Only then was his body finally embarked on the trip back to Baltimore, Maryland.

The tallest man officially registered was Robert Wadlow (1918-1940), who is 2.72 m (8 ft 11 in) tall, and skeptics consider it highly unlikely that Kap Dwa is real, although it is physically possible for a man to reach the size of the legendary giant. As for his two heads, if he really had two heads at first, the Siamese are not exactly uncommon, especially in those days.

Those who have seen the giant up close claim that there are no seams or visible seams and the only piece of rope was that of his loincloth, concluding that there had been fraudulent taxidermy performed in the unusual display.

The contradictory stories can simply be the product of the natural promotion of a rarity during so many years of visualization of the attraction. However, Kap Dwa was not the only giant that came to be mentioned in anecdotes of the 17th century. The Dutch captain Sebalt de Weert (1567-1603) described an incident in which he and his crew witnessed members belonging to a race of giants. When passing through the Strait of Magellan, de Weert saw seven unusually large boats of menacing oars approaching their ships. The ships were supposedly manned by naked giants with reddish-brown skin and long, red hair. His posture and behavior were aggressive, determining de Weert to get away from them.

There are also several documents from the same period of time in which there is evidence of the existence of giants. One of these writings is the Ríos Codex, also known as the Vatican Codex A. This manuscript is the 16th-century Italian translation of an older document written during the Spanish colonial era. The script offers an intriguing full-page illustration of several Aztec warriors defeating and executing a giant man. The annotations provide the name of the giant – Quinametzin, which translates as One of the Ancients.

This story and many others support the theory that the American continents were once the home of an ancient race of red-haired giants. Legend has it that the giants came from a distant island, crossing the ocean in rafts when a cataclysm destroyed their homeland.