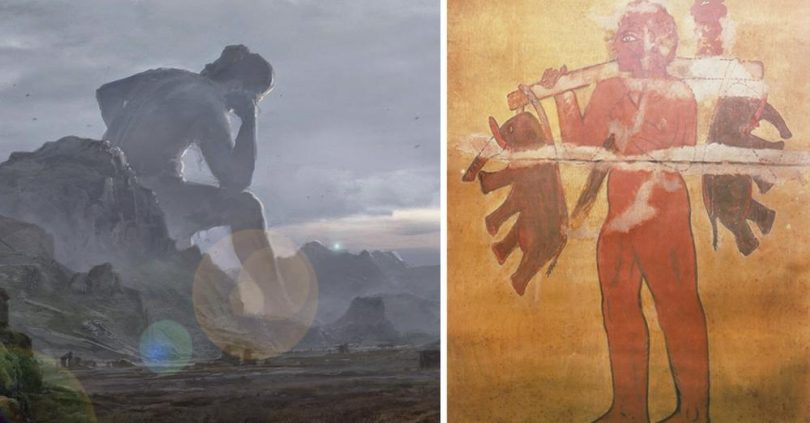 The pyramids of Nubia are located in the city of Meroë, former capital of the Kingdom of Kush. In these structures there is an old mural where a giant is seen lifting two elephants.

In the royal cemetery of the ancient Kingdom of Kush , there is a group of 50 pyramids made of sandstone and red brick.

Many of these are dilapidated, the fault of time and looters. The decorations on these monuments speak volumes about how global the kingdom was. However, there is one that is especially striking.

The giant of the ancient mural

The different pyramids found in the city of Meroë make it coveted by tourists. Among these are the famous Nubian pyramids .

This deposit was discovered by Europeans in 1821, thanks to the French mineralogist Frédéric Cailliaud. The most interesting of these pyramids is in reliefs and paintings of the burial chambers.

The one that caused the most concern in the experts was the ancient mural that represents a giant of enormous proportions lifting two elephants .

The features of this character are not characteristic of the area, but Caucasian . Many theorists have hinted that this is proof that red and white giants inhabited Earth.

This theory has been around since 79 AD. C., when the Roman historian Josefo Flavio , wrote that the last race of Egyptian giants lived in century XIII a. C. , during the government of Josué.

Flavio wrote that these were huge, their faces evoked fear, as did their thunderous voice, which they compared to the roar of a lion.

This is assumed by the different paintings found in ancient Egypt , where the pyramid builders are depicted as giants.

Experts believe that these people were over 5 meters tall and could lift up to 4 tons of blocks.

Some of those paintings also showed giant kings ruling Egypt. Others show ordinary people, very small in comparison to such characters.

This theory could be confirmed with a discovery in 1988. Gregor Spoerri , a Swiss businessman and passionate about ancient Egyptian history, found a giant finger after meeting with grave robbers.

White giants in other cultures

The appearance of “Caucasian giants”, such as that of the ancient mural of the pyramids of Nibua, is also mentioned in other cultures.

The Paiutes , an ancient North American tribe native to Nevada, have an oral tradition that they related to settlers.

These include a race of giant, white and red-haired individuals known to their ancestors as “Si-Te-Cah”, which inhabited an ancient cave.

The Choctaw Amerindian people also tell legends where their ancestors fought against a race of Caucasian giants that inhabited the territory that is now Tennessee.

Even the first settlers who arrived in South America, said that in the Patagonia region , they saw a town of tall, white and red-haired people.

All these legends, including that of the ancient Nubian pyramid mural, could have a common origin; the Atlantis .

Historians, theorists, and alternative researchers have suggested a hypothesis about the survivors of the cataclysm . These would have fled to different regions of the world, where they settled and created different civilizations, based on the ancient Atlantean knowledge.

Is this ancient mural a representation of an Atlantean giant? It’s possible. Historians assure that all these stories are simple mythology, however, it is hardly credible that so many cultures around the world have such similar legends.