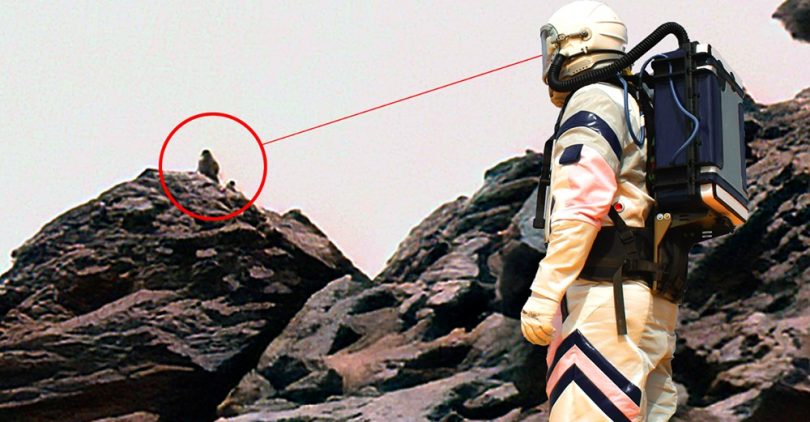 UFO hunters have found everything from ‘lizards’ to ‘bears’ by combining images of Mars taken by rovers like Perseverance.

It may be touted as humanity’s main cosmic destination but, if UFO hunters are to be believed, Mars is already home to a vast collection of animals.

Some theorists have found everything from ‘crabs’ and ‘lizards’ to ‘bears’ and ‘rabbits’ by combining images of the red planet taken by rovers like Curiosity.

Of course, most experts believe that they are simply rocks of interesting shapes and it is a clever trick of the mind that makes us think that we are seeing creatures.

Last year, several UFO hunters saw a “baby bear” on Mars and claimed that it would be alive, based on its “hair” and the shadows that were seen around its body.

It was identified by YouTube user “Paranormal Crucible” among photos of Gale crater taken by NASA’s Curiosity rover, who alerted the UFO Sightings Daily website.

Site editor Scott C Waring said: “There is a reason NASA puts the photos in black and white. To hide living beings and plants that are of an obvious color ”.

“This creature has real hair as seen from the shadows around its body. That means it is not a statue, but a living creature. “

“Paranormal Crucible” called his find a ‘possible hybrid rodent’ rather than a bear and exaggerated certain characteristics, including a tail, in his video.

He wrote: “The anomaly that was photographed near the gale crater appears to show a small mammal-like creature, possibly a hybrid species of gundi or prairie dog.”

Months earlier, another blogger claimed to have seen “a lizard roaming Mars.”

The claim, published again in UFO Sightings Daily, made some theorists fearful that NASA could be planting life on the planet for scientific testing.

“With the existing water on Mars in small amounts, it is possible to find desert animals roaming around … although it is very rare,” Waring wrote on his site.

While all of these ‘animals’ may be living on Mars according to UFO hunters, scientists have explained that their presence is a trick of the mind called pareidolia.

Seth Shostak , director of the Center for Seti Research, said it is the psychological response to seeing faces and other important, everyday items in a random stimulus.

It is a form of apophenia, which is when people see patterns or connections in random, unconnected data.

Human eyes can detect faces within their environment and help them to recognize friends in a crowd, calculate how fast a car is traveling, and see patterns.

Scientists claim that we also tend to use this ability to ‘enrich our imaginations’ and recognize meaningful shapes, even when they are not there.

“Those who send me [images] are generally quite excited, as they claim that they often look like something you wouldn’t expect to find on the rusty and dusty surface of the red planet,” Shostak said.