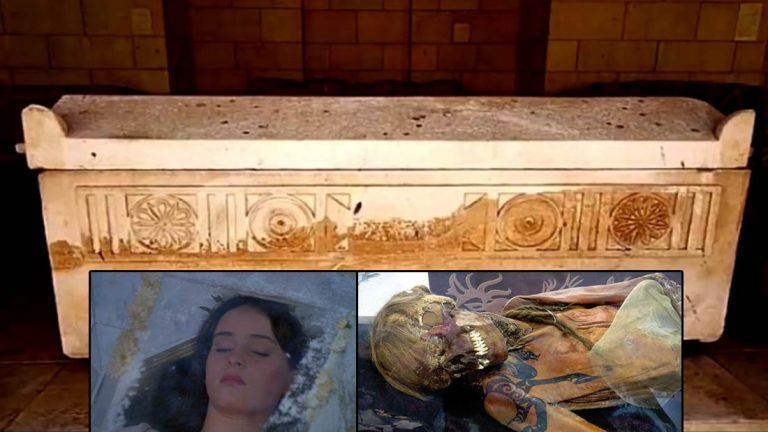 Princess Tisulsky emerged from an enigmatic report about the discovery of an 80 million years old woman preserved in a sarcophagus of unknown origin.

According to mainstream science, humanity emerged 300,000 years ago, so this finding, if confirmed, would have changed the history books.

Perhaps it was covered up by the world’s dark political elite.

Princess Tisulsky was found in September 1969 in a region of Russia called Kemerovo .

The discoverer was a worker in a coal mine located more than 80 meters deep. What they found was a kind of sarcophagus or coffin.

The miners then brought the sarcophagus to the surface and displayed it in the Rzhavchik Tisulskago village .

When they opened it, they noticed with surprise the presence of the body of a deceased but completely preserved woman.

It was held mummified, submerged in a strange bluish-pink liquid mineral.

She had white skin and surprisingly wide blue eyes, appeared to be in her 30s and of European origin. On her head she carried a box-shaped or black cube artifact

Authorities appeared the day after and confiscated this mysterious ancient woman.

Surprisingly, the entire town was evacuated, warning that the site had been “contaminated. “

Government agents tried to transport the sarcophagus by helicopter, but it was very heavy, so they decided to dump the mineral substance inside.

When they threw it out, they saw that Princess Tisulsky’s body began to turn black , although it later returned its color (giving the impression that her body was coming back to life! ). Agents then closed the lid of the coffin.

Later, the Russian government grants the biological study to a group of scientists from Novosirbirsk .

The conclusion would have been that the woman was 80 million years old, according to chemical dates.

This scandalously unusual supposed finding can be associated with the theory of ” star seeds “, the possibility that ancestral aliens had “cultivated” human life here on Earth, in a genetic mix of them with terrestrial hominids.

In addition, many reports of UFOs and aliens describe encounters with beings very similar to humans (and with European features), such as the so-called Pleiadians.

Unfortunately, the names of the scientists who studied Princess Tisulsky’s body have not been located.

On the internet you can find some photos related to this ancient woman, but, later, it was confirmed that they were from the 1987 film Snow White.

The case itself is probably a sham, but it is also possible that it was part of a conspiracy, that the authorities had covered it up and kept it a secret to this day.