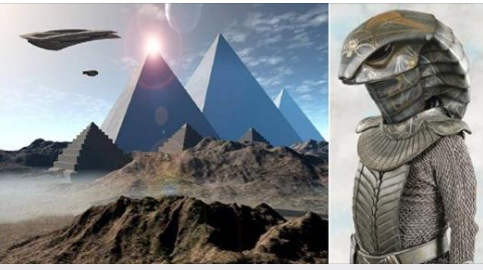 Though not everyone is willing to admit it, our planet is full of relics and monuments that prove Earth was once populated by extremely advanced civilizations. Point in case: the third ice-covered pyramid discovered in Antarctica!

Ever since the service was released, Google Earth been a boon not just for conspiracy theorists but also for anyone looking to uncover clues about what lies hidden beyond sight. If you need a good vantage point, you need good eyes and altitude. Satellites have both.

The latest in a group of three snow-covered pyramids was recently discovered through Google Earth satellite imagery and in a few days, the finding has taken the alternative history communities by storm. Two of the pyramids can be found approximately 10 miles inland while the third rests near the coastline. 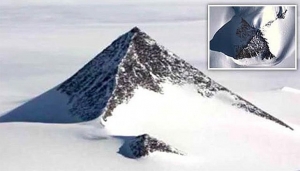 The implications of this discovery are complex and if accepted, it could turn the scientific world on its head. No history book ever mentioned an Antarctic civilization with the skills and technology necessary to erect enormous pyramids. There is one apparent reason behind this situation and by the looks of it, it would suggest tech-savvy civilizations existed on Earth a long time before our own emerged.

Antarctica is now a frozen wasteland but it wasn’t always like this. It got to its current position through plate tectonics, inching closer to the geographic South Pole year after year. Millions of years ago, Antarctica’s climate was much warmer because its position was closer to the equator. This is established fact backed up by several accepted discoveries, not some wild speculation.

Some years ago, the British Antarctic Survey (BAS) uncovered evidence that the antarctic climate was much different in the distant past.

Go back 100 million years ago,” BAS’s Dr. Vanessa Bowman said “and Antarctica was covered in lush rainforests similar to those that exist in New Zealand today.”

Another expedition –led by NASA and involving 11 other scientific organizations– discovered out-of-place microbial life forms in the depths of Antarctica’s Lake Vida, trapped under a sheet of ice 65 feet thick. The microbial colonies had been prospering in isolation for millions of years and scientists believe they are the descendants of microorganisms that lived in a much warmer climate. Who knows what other enigmas lay buried in ice, hopelessly waiting to be revealed. 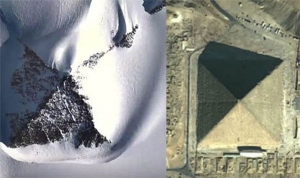 The resemblance is unsettling.

Even with today’s technology, building structures as massive as the pyramids of Antarctica would be nearly impossible. There are simply too many problems relating to manpower and the logistics required for such a project. If building these mysterious monuments were to be a viable venture, it must have taken place in the past, when Antarctica was a favorable place for human life.

And this opens up a king-sized can of worms. The continent was habitable only in the very distant past, but mainstream science says the wheel wasn’t invented until some 6,000 years ago. At the same time, anatomically-modern humans are said to have mastered fire only 125,000 years ago. So where do these controversial pyramids fit in? Are they evidence of an ancient advanced civilization or do we need to stretch our imagination even further and regard them as proof of time travel? The mind boggles when we remain attached to our outdated beliefs.

Proponents of alternative history and fans of the ancient aliens hypothesis have no problem in accepting the parallel reality generated by such discoveries. It’s not hard to see and accept that we aren’t the first and though it may seem this way, we probably won’t be the last.

Thousands of years after they were built, we are still fascinated by the Egyptian pyramids. The monuments left behind by their society have stood the test of time and in more than one way, they’ve granted their builders immortality. Keeping that in mind, what could be said about pyramids that are millions of years old? Does that put our own lives into perspective and make us see the bigger picture?

Or do we recoil in egotistic dismissal?